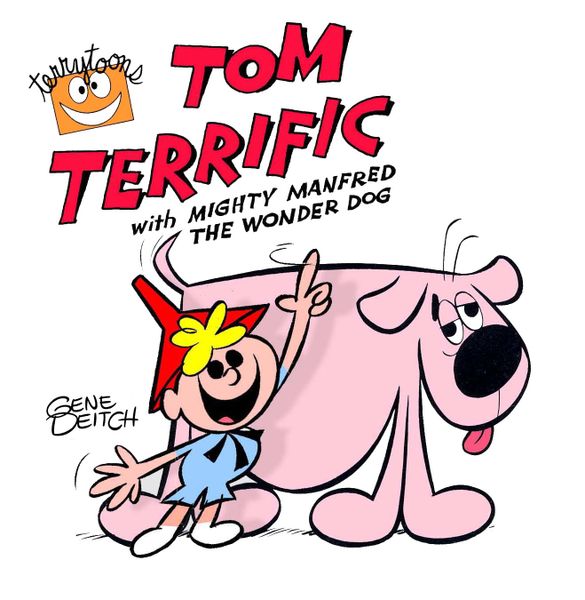 Tom Terrific used via Creative Commons license from the artist

I was, my mother always said, one of Captain Kangaroo’s first audience.Â Â Â  It’s probably true; we did have a TV in 1955 when we lived in a housing project somewhere near New York City while my dad worked on his Ph.D. at Columbia.Â  (I wish I knew where that place was–it’s the only childhood address I can’t remember, other than we were in apartment 3E.)Â  The TV most likely belonged to, or was on loan from, my dad’s parents, since it was one of those huge cabinet models with two front doors.

One of the features in the Captain Kangaroo show was a cartoon called Tom Terrific.Â  Tom Terrific could transform himself into anything, and he was almost always accompanied in his travels by Mighty Manfred the Wonder Dog (who was a doggie doofus from the get-go).

I don’t remember a lot about those cartoons, but I do remember one in which an elephant who was supposed to remember everything, forgot the combination to a lock of some kind.Â  And it wasn’t till Tom said something about “being the one to free them” that the elephant realized that the combination was “one two three.”

All of this is by way of my musing that we modern-day folk have to remember a lot of combinations, with far worse mnemonics than the elephant got.Â  I personally don’t have much trouble remembering all my passwords, which is why I never write them down.Â  It’s not so easy for other members of the family, which is why I ended up having to unsnarl the bank web site today.

It’s not supposed to be safe to write down passwords–but if you can’t remember them, what else is there to do?Â  I know there is plenty of password-keeper software out there, but you still have to remember the password to the “lockbox” they create.Â  And if the password for that has to be easy to remember (or guess) then it’s not particularly safe.

I wonder if it’s a matter of brain chemistry or brain priorities that produce some people with the ability to remember just about everything, and others who fall into the “CRS” category without half trying?