I’m a passionate consumer of the printed word. I read hundreds of books every year, almost all of which I get from the public library. I seldom buy books any more, lacking both budget and storage space, but there are a few authors whose works I will buy sight unseen as soon as I can get my hands on them. The most notable of those authors are Diana Gabaldon (fiction) and James D. Tabor (fact).

When I first read Dr. Tabor’s The Jesus Dynasty several years ago I was astounded by the simple rightness of it. I found myself saying “Yes! That’s how it was! That’s how it had to have been!” over and over as I turned the pages. I wrote a review of it here at the time, but in the various transitions and transformations of this blog over time (several new versions of the software, one big database swap, etc etc etc) the review itself got mangled and I can’t link to it now.

When Dr. Tabor teamed up with Dr. Simcha Jacobovici to write The Jesus Family Tomb, and to produce a show about what they then called the “Talpiot Tomb,” I read the book with interest, but could not quite agree with them on their conclusions. I had no religous objections (obviously, since I espouse no recognizable religion) to the idea that the man whose name has come to us as Jesus the Christ was interred with his family in a tomb near Jerusalem, and Dr. Tabor and Dr. Jacobovici laid out their case carefully and with plenty of supporting evidence. But I just could not accept the idea that after all these thousands of years, any particular family’s tomb would still exist, much less the tomb of such an important family.

However, with the publication of [amazon asin=B004T4KX9G&text=The Jesus Discovery], I must say that Dr. Tabor and 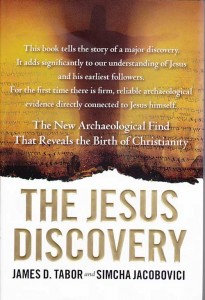 Dr. Jacobovici have changed my mind. With the new discovery of another, adjacent tomb from the time of Jesus, with clear evidence of its occupants’ belief in the resurrection, it seems clear that the first tomb could indeed have been just as the authors said it was.

I’m just sorry that the book jacket design is so incredibly unfortunate. I think it’s supposed to be a Torah scroll with a silhouette of Jesus overlaid on it. But what it looks like, especially from any distance at all, is a vew of someone’s bare backside. I hope, hope, hope, that new editions will get rid of this cover!

As always happens when new discoveries have been made that have anything to do with Christian origins, there has been the predictable amount of breast-beating, sniping and derogatory commentary. I have never understood why some people are so completely frightened by the notion of new discoveries like this. After all, everything we discover now has been there all along. One would think that anyone who believes the concept of “As it was in the beginning, is now, and ever shall be,” would have no reason whatever to fear and would welcome the chance for greater knowledge. Alas, this is definitely not the case.

Whether you believe or not, you really owe it to yourself to read this book. Dr. Tabor and Dr. Jacobovici once again lay out their case, point by point, backing everything up with evidence and facts. This is not a matter of accepting the improbable on faith; it’s a matter of following the facts to an inevitable conclusion. I can’t do justice to it in a short discussion because the reader needs to see and understand each step along the way. It’s also worth reading Dr. Tabor’s blog and the Jesus Dynasty Blog (see the link in the right sidebar) to see how he and Dr. Jacobovici answer their critics.