My kids lose patience with me pretty quickly. I suppose that runs in the family, since my mother drove me crazy on a regular basis. However, my mother and I communicated by talking with each other, so usually it was not difficult to get the general tone of the conversation.

Being a Modern Mom, I communicate with my kids via text message, Twitter and IM a lot. (For those of you who don’t know me, my “kids” are in their 30s and got their first computer in the mid 1980s.) I first started chatting online in 1984 and know that it’s ridiculously easy to misunderstand, misconstrue and just plain go off into woo-woo land when all you have is letters on a screen, but still…

We rearranged the office not long ago. Part of the new arrangement involves putting my Mac computer in a corner that’s 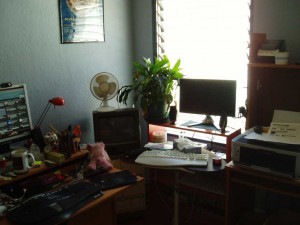 My little corner of the world

not quite big enough to hold the arrangement I have for its keyboard and mouse. There’s not room for another desk in here, I’ve had bad luck with KVM switches, and… well, trust me, the Mac has its own separate Microsoft Natural ergo keyboard and wireless mouse, and they take up space, and I made a “desk” of sorts for them by putting a Levenger lap board on top of a Dave table from Ikea. This worked wonderfully in Office 1.0. Office 2.0 doesn’t have enough room, even after I chopped about three inches off one end of the Levenger board.

I’m working on my third novel with Scrivener for Mac, because it is the BEST, hands down (the PC version is hot stuff, too, but the Mac edition’s been around longer and has more features). This means that every day I have to try to type while working in less space than I really need.  So, what’s the point, you say? Well, the other night I idly wrote on Twitter that I should start saving up for a Mac laptop. I meant it in terms of “and then I’ll have more options as to where I sit,” and my kids took it as “there she goes, trying to reinstall Windows to fix her wallpaper AGAIN” and came down on me like a ton of bricks.

Honestly, I was surprised and a little hurt by the reaction. I mean, I get enough of that from them when I deserve it, but this caught me completely by surprise. Trying to explain myself just annoyed them more. I could console myself with the thought that they weren’t pulling that on MY mother.  🙂

So, I figure that if I save up at the same rate as I did to buy my Mac Mini, I can probably have the least expensive Mac laptop in about a year and a half. Of course, by that time Apple will have abandoned the current cheap model, raised the prices and put in something completely new, but hey, a gal’s gotta have goals.